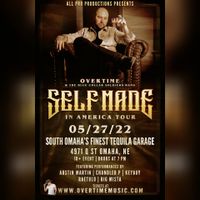 Following a tremendously successful campaign promoting his album "Divided We Fall", Overtime has another loaded into the chamber! Get ready for "Self Made In America"! Catch one of the fastest growing independent artists in the world live in concert! You'll get a mixture of country, rock, and hip hop taken to another level with his Blue Collar Soldiers Band playing behind him. The live performance is the pride and joy for Overtime so come watch him leave it all on the line! Featured on the tour is Austin Martin, Chandler P and Keyboy.